This beginning set a precedent: that UD is home to women with a religious vocation. Our religious alumnae and Dominican professors have shared their discernment stories and the role UD played in discovering their lifelong call to religious life, in hope that their experiences will aid young women at UD in their own discernment processes.

Sister Mary Angelica Neenan, O.P., grew up in a loving Catholic home in Boston with four siblings. She attended the Massachusetts College of Art, where she was pursuing an art degree and had no post-graduation plans besides wanting to “get married and have 12 children.” During her junior year of college, she began to feel a pull toward religious life, but the idea was not yet appealing to her.

Sister Elinor Gardner: 'Be Not Afraid'

In high school, Sister Elinor Gardner, O.P., was deciding between the University of Dallas and Saint Anselm College in Manchester, New Hampshire. She was certain that she wanted to go to a small, Catholic liberal arts college, but ultimately settled on attending Saint Anselm. “I find it interesting that the Lord eventually brought me back to the University of Dallas,” she said. “It’s as though it was always meant for me, just not at that time.”

Sister Anne Catherine Burleigh: ‘The Person God Created You to Be’

“If you would have asked me while I was at UD if I was going to become a sister, I would have laughed. As a matter of fact, I did laugh,” said Sister Anne Catherine Burleigh, BA ’94. When she was a senior at UD, she enjoyed attending the many lectures on campus. One night she went to a talk hosted by Campus Ministry featuring two Dominican Sisters of St. Cecilia from Nashville. She was pleasantly surprised by the liveliness of the sisters, joking to her friend on their way out, “If I’m not married by the time I’m 28, I’m going to become a Nashville Dominican.”

Sister Mary Edith Humphries, BA ’95, recalled choosing Gerard Manley Hopkins for Junior Poet and Walker Percy for her Senior Novel project, two feats that UD English majors still face today. Learning about the Nashville Dominicans from her roommate inspired Sister Mary Edith to discern and, ultimately, discover her own vocation as a Dominican. Sister Mary Edith said many sisters share similar experiences: “A friend who was discerning actually leads another who had no idea this was her call to the place she belonged.”

After graduating from UD with a degree in history, Sister Mary Gabriel Devlin, S.V., BA ’96, moved to New York City to be a nanny. As she grew in her love for the children she was caring for, she came to realize she wouldn’t hesitate to give her life for them, or for any children. At the same time, she began volunteering in the South Bronx and would pray the rosary with “the little old ladies” after daily Mass. Sister Mary Gabriel found herself thinking, “This is  weird — I’ve traded my happy hours for holy hours!”

Sister Michelle Geiger: 'Beyond the Here and Now'

For Sister Michelle Geiger, BA ’88, of the Salesian Sisters of Saint John Bosco, her discernment process began during her undergraduate years at UD. While in high school, she went to church because her parents made her, but in college, she began wanting to. She attributes this desire to “the classes, the religion and the environment at UD, which all triggered this deep thought that we’re all called by God for something bigger than ourselves.” 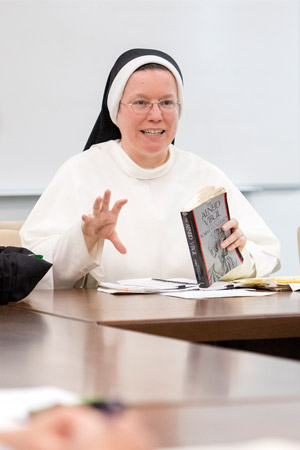