The Donald and Louise Cowan Archive was established to transform 21st century culture through acquainting the public with the necessity of liberal learning and promoting the central role of poetry in the quest for the good life and the movement toward a humane, noble and just society. 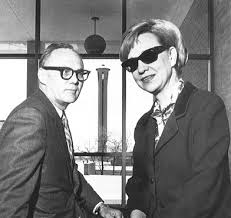 Donald and Louise Cowan, visionaries in the fields of education, physics and literature, were the guiding lights of the University of Dallas from the 1960s until their deaths as they established a Core curriculum of classics and set high standards for learning in students’ chosen fields. The Archive aims to continue their essential work by holding conferences, lectures, and seminars based on the Cowans’ thought and teachings, by encouraging publication of explorations of their ideas, and by making available their published and unpublished essays, lectures and notes on literature and liberal education, as well as their annotated library, to the general public.

Providing a coherent framework in which the classics of the ages can be read, appreciated, and understood, the Archive invites students of all ages and levels to begin a lifelong journey to greater understanding of themselves, the world, and the great tradition out of which these testimonies to the noble life arose.

Give to the Archive

Anyone interested in making a gift to the Cowan Archive may do so by clicking the Donate button above. When the donation screen appears, please select "Other" from the drop-down menu and write in "Donald and Louise Cowan Archive." Donors can give either by credit card or direct debit/ACH through this page, or can mail in a check to the university and direct it to University Advancement. Thank you for being a part of Donald and Louise's legacy and ensuring their visionary work remains accessible to all.

On May 27, 2020, Dr. Peter Vincent Sampo, founder of four Catholic colleges and promulgator of liberal education, breathed his last. He was a hero of Catholic higher education, without great fanfare planting new places where community flourished and learning was a joy, where the brightest students helped to bring the least accomplished along, where students lived with the ideas and questions, the poems and works of art they had been introduced to. And the University of Dallas played an important role in the formation of his vision and achievement.

Peter Sampo believed that a liberal education no longer belongs only to an elite, because Christ revealed that equality is part of the Good. As Sampo noted, “any person has depth of soul sufficient to enable him to respond sympathetically to the vision presented by liberal learning.” Catholics therefore “should consider themselves responsible for providing a liberal education for everyone,” a calling he took to heart over and over. For he lived in hope, knowing nothing is impossible for God. The great joy he showed in founding colleges when anyone else would have quailed at the challenges involved attests that starting them was for him a way to address that universal responsibility of education.

Yet Dr. Sampo insisted that the Catholic college must set forth its Catholicism not by evangelizing but by showing in its curriculum the depth and range of “the most significant human experiences: pilgrimage, suffering, community, death, and resurrection, to list a few [of the] fundamental experiences that the student will undergo throughout his life.” These experiences become able to be reflected on by study of the classic works of the Western tradition. A genuine education in them, he continued, “causes joy to well up in the soul” of the student “because his being recognizes and approves” the inner transforming growth taking place.

This conviction began to take distinctive effect when his partnership with Dr. Mary Mumbach (B.A. ’70, Ph.D. ’77) began. What she brought with her was all she had learned from the Cowans at the University of Dallas, both as undergraduate and as doctoral student, about beauty, taste, and judgment in the experience of literature. This new perspective, followed by friendship and collaboration with Don and Louise Cowan, resulted in the flowering of a campus culture and intellectual atmosphere that was beyond compare in its natural appeal for young college students. Thomas More College had a structure that was not copied in miniature from the University of Dallas but was reimagined by its same guiding principles, to fit a small college based not just on the good and the true but on the beautiful. And it produced a generation of students whose judgment and sense of the aims of life were well-honed, whose familiarity with the classics was not list-based but was a natural part of their lives, as though these young people had suddenly appeared on American shores by magic transport from King Alcinous’ island.

Donald Cowan had observed, “The curriculum is the center of the solution; it must be the same for all students, but designed for the best – not in its complexity but in its imaginative scope and profundity.” A perspective such as this was what led Peter Sampo to write to him, “You are the only man I know of anywhere who has the kind of wisdom and experience that can help guide our institution” (letter of Dec. 10, 1982, in D. & L. Cowan Archive). Hence in addition to students’ other courses at Thomas More, the entire student body – freshmen to seniors all together -- took a four-year, six-hour Humanities program that guided them through every stage of development in Western civilization. The feeling of living in the sweep of history was bracing. Ideas and culture were integrally related. Richard Wilbur was uppermost in their minds as a poet who spoke to our time (and who visited that New Hampshire campus), as were Plato and the Federalist no less.

Sampo also adopted from the Cowans the focus on acquiring a particular way of knowledge proper to a particular discipline, and the necessity of students having a semester together in Rome. There was reverse influence as well: the summer program for high school students was one of his earliest ventures into curriculum formation, for he must have realized he had to reach students in high school to prepare them for the intense college work that they would need. That program has found an adopted home on our Irving campus, reimagined, as Arete: An Introduction to the Classics.

Peter Sampo’s care for the growth of each student meant that the colleges he founded would always be small in size – such personal attention would not be practicable on a larger campus. But it was his effect on those students that left the footprints of a giant in modern American education. He planned his curriculum to begin having its greatest effect twenty years after graduation. So the full story of his influence on higher education has yet to be told. Meanwhile, let us pray for the repose of his soul, as well as, in gratitude, for the continued good work accomplished by his vision, joined with ours.

Archival resources are available in person in the Archive, located in the Cowan-Blakley Library on the University of Dallas campus, 1845 E. Northgate Drive, Irving, Texas 75062. Scholars interested in studying the writings of the Cowans are particularly welcome and will be provided with study space and available guidance. To inquire further, call 972-265-5771 or email the director at cowanarchive@udallas.edu.

Because of the Cowans’ central belief that the study of classic poetic works, fundamental to a liberal education, is of crucial importance to moving persons and society towards the Good, the Archive has a selection of their works available online to reach as many people as possible. These can be found at Digital Commons. Some of the lectures are in audio form, allowing listeners to experience the power of Louise Cowan’s voice and teaching style.