Capstone Professor Celebrates Half a Century 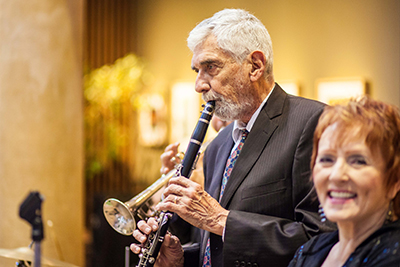 “I ended up at UD by accident,” said Professor of Management Bruce Evans, who has taught at UD for 50 years now.

Half a century ago, Evans was on a camping trip with his brother, seeing the sights of Texas. On their way home to the East Coast, they were passing through the Irving area and saw signs for UD; Evans asked his brother if he would mind stopping off there for a bit. It was Memorial Day weekend, and no one seemed to be around, but they made their way to Braniff Graduate Building, where Evans finally located an open office: that of Bob Lynch, dean of the newly formed Graduate School of Management (now the Satish & Yasmin Gupta College of Business).

“We were total strangers, and we talked for two and a half hours,” said Evans. “He hired me on the spot.”

Evans had been in the reinsurance business for nine years at that time and had become vice president of reinsurance at Transport Insurance, but a change in leadership had led to the loss of his portion of the company, so he was considering changing careers. Most of his family, including his uncle who taught at Harvard University and his sister who taught at Gallaudet University, were in education, so it seemed like maybe this was the path that he, too, was meant to be on.

While Evans taught the Capstone course for MBA students from the beginning, it was not always the Capstone Experience that it is known as today. Initially, it made use of antiquated textbooks and inactive case studies; even professors from universities with leading business schools such as Stanford, Harvard and Tulane, who were brought to UD to consult, endorsed these methods. However, Evans disagreed: “Why no living experience versus books?” he asked.

Then, a student approached Evans to say that his boss would love to develop a client relationship with UD; this proposal led to the first Capstone Experience in which a team of MBA students consulted with an organization on a comprehensive project. In the Capstone Experience, teams are expected to develop a scope of work (or proposal), research the firm/industry, interact with the client on an appropriate basis, and present their project findings/recommendations to the client in the form of a report, presentation and/or debriefing near the end of the semester. There have been 190 Capstone Experience projects so far.

One big change Evans has seen in the MBA program since the Capstone Experience was first developed was the change from a 15-week semester to a 12-week trimester. At first, he feared that this change, having only 12 weeks to complete a Capstone versus 15, would be difficult to navigate, but in making adjustments to the way students are prepared for the course, it has actually gone very well.

“It used to be that they would get no details of the project until it arrived,” he explained. “When it changed to 12 weeks, they had to do more prep work. I suggest what they need to research — issues in the industry, etc. — and they come in ready to go.”

Another component that Evans enjoys teaching is Corporate Governance, in which the students find business executives and invite them to UD for a two-hour panel toward the end of the semester.

“I have had great relationships with deans and with students, a joining of respect for what we’re doing,” said Evans.

Evans is known on campus as “Professor Bruce.” Early in his career at UD, he explained, he was approached by several international students, who were concerned that their home experiences caused them to delay making comments in classroom discussions. In their backgrounds, they were accustomed to a more formal classroom structure, so they carefully thought through their remarks before making them, and titles were expected. Meanwhile, their stateside classmates swiftly responded in classroom conversations, often not giving the international students a chance to join in.

“So we reached an understanding that we blended our backgrounds,” said Evans. “It became okay to include me as Professor Bruce … while I encouraged the local students to delay making comments until they allowed space for international contributions.”

Evans has also been a musician since he was eight years old and plays clarinet in the band Sound Judgment, which has been together for decades; they have provided musical entertainment at the President's Reception/Gala the night before graduation for 35 years now, as well as at the Cotillion Ball and Alumni & Family Weekend.

A badminton and tennis player for many years, Evans also once tried to organize a students-versus-faculty softball league. The first Saturday that particular October, the faculty lost 35-3; the following Saturday, they tried imposing limits on innings in hopes of yielding better results, but they still lost by about 35; the third Saturday, the game was drowned out in a torrential downpour.

“A few of us went and had a beer; the rest went home,” said Evans. “That was three signs, so we called it off after that.”

Evans has only missed three classes in 50 years; he is extremely proud of his attendance record.

Chair and Assistant Professor of English Debra Romanick Baldwin, Ph.D., and Professor of Physics and recent Interim Dean of Constantin College Sally Hicks, Ph.D., have secured a $299,078 grant from the National Endowment for the Humanities to support writing instruction at UD for the fall 2020 semester.

You Can Do What with a (Spanish) Degree?

His first step was to enroll in physician’s assistant school at Baylor’s College of Medicine, a career trajectory to which he had aspired since his early childhood. Nowadays, Jonathan Cunningham, BA ’17, is dedicated to the vocational pursuit of comfort and healing at MD Anderson in Houston, among the largest cancer treatment centers in the U.S., where he was once a chemotherapy patient himself.

During his Rome semester in 1991, Joseph Meaney, BA '93, with his friends (now Father) Kevin Cook, BA '94, and (now Texas State Representative and UD Trustee) Tan Parker, BA '93, attended a private Mass with Pope St. John Paul II. Several weeks earlier, they had hand-delivered a letter to the Swiss Guards outside St. Peter's requesting the Mass and including their contact information; at last, they'd received the phone call instructing them to be at the Bronze Gates at 5 a.m.