** Each show will be LIVESTREAMED once. Please go to   https://udallas.edu/mainstage to view the show at 8pm CST on the dates below. ** 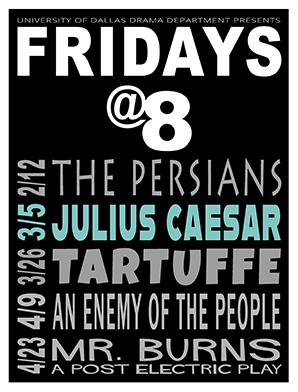 2/12: Aeschylus' The Persians (472BC) The oldest fully extant Greek tragedy explores the limits of hubris, and ultimately, empathy. Can we mourn for our 'enemy'?
2/26: Julius Caesar (1599) by William Shakespeare: Perhaps Shakespeare's most overtly political play. What are the limits of patriotism?
3/12: Moliere's Tartuffe (1664)  France's greatest comic playwright in his masterpiece of false piety and pretense. Who deserves our trust?
3/26: An Enemy of the People (1882) by Henrik Ibsen. A landmark of the drama of Realism. How far should we go in pursuit of Truth and what are the limits of free speech? In a new version by Robert Falls.
4/16: Mr Burns, a Post-Electric Play (2012)  by Anne Washburn. One of America's finest contemporary dramatists, Anne Washburn's darkly comic play asks us how we rebuild after a global crisis and celebrates the enduring nature of theatre itself. And the Simpsons. (performed with a live video feed)

The following obituary was provided by Lisa Mobus, BA '90,daughter of Dr. Fougerousse. Mass at the Church of the Incarnation will be offered for the repose of his soul on March 3 at 5 p.m.

After nearly a year of planning, the University of Dallas announced a comprehensive plan that includes reducing business operations costs and restructuring some of the university’s academic programs over the next three years.