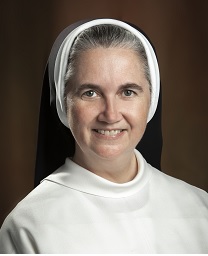 Sister Mary Angelica Neenan, O.P. earned the S.T.D. from the Pontifical University of St. Thomas Aquinas in Rome, the Angelicum, in Moral Theology in 2011, as well as the S.T.L. and S.T.B. She has been teaching Theology at Aquinas College in Nashville since 2007, and has served in other assignments such as directing the study abroad program for Aquinas College in Bracciano, Italy, from 2014-2017. Sister Mary Angelica is also a trained portrait painter and enjoys painting and drawing, and received her first Undergraduate degree in Fine Arts from Belmont University in Nashville. She is delighted to join the UD Theology faculty as an affiliate assistant professor.

The Nature of the Human Soul: Philosophical Anthropology and Moral Theology.Cluny Media Edition, 2017.

The Human Soul and its Faculties: Philosophical Anthropology and Moral Theology.Edizioni OCD: Rome, 2015.

“Faith and the Passions,” in Aquinas College Magazine, Spring 2013.

“Grace Upon Grace: How Grace Works in the Soul” for the Authenticum Series, Grand Rapids, MI, March 1, 2018.

“Introduction to Moral Theology” and “Sacraments in general, especially Baptism”, given to catechists of the Diocese of Nashville, Nashville,  TN, October 21, 2017.

“The Last 4 Things: Death, Judgment, Heaven, Hell” for the Catechetical Formation Program of Aquinas College, given to catechists of the Diocese of Nashville, Brentwood, TN, October 8, 2016.

“Feminine Virtue according to St. Edith Stein” given to young women at Emmanuel School of Mission, Rome, Italy, April 5, 2016.

“What is a vocation?” given to young adults at the Eucharistic Congress of Charlotte, North Carolina, September 14, 2013.

“Introduction to Spiritual Theology” given to the St. Cecilia Chapter of the Dominican Laity, Nashville, TN on September 8, 2013.

“The Nature of Vocation” given to the Boston Pro-Chapter of the Dominican Laity in Newton, MA, May 19, 2103.

“The Importance of Virtue and Grace” given to the St. Cecilia Chapter of the Dominican Laity, Nashville, TN, May 5, 2013.