A Catholic Vision of Difference and Unity
Rooted in Dignity

The University of Dallas is committed to protecting the dignity of every human person.

"The human being is single, unique, and unrepeatable, someone thought of and chosen from eternity, someone called and identified by name." -- Pope John Paul II

Human life is sacred because from its beginning it involves the creative action of God and it remains forever in a special relationship with the Creator, who is its sole end (The Catechism of the Catholic Church, 2258).

The University of Dallas is dedicated to upholding the Catholic Church's teaching that every person is made in God's image.

The Church's composition creates an opportunity to learn about the beauty in uniqueness, culturally and individually.

Perhaps most importantly, our faith reflects the family institution. The Church is a maternal figure and God is the Father. We, as members of the faith, are brothers and sisters in Christ. The university is part of a community connected through shared Christian values and morals.

Recognizing these motivations, the University of Dallas celebrates and appreciates the diversity of our university community, promotes the dignity of the unborn, leads Presidential Conversations on critical issues, and supports first-generation and students from underrepresented communities with a number of scholarships (below) and programs, such as the Constantin Scholars.

All men and women are “created in the image of the one God and equally endowed with rational souls,” having “the same nature and the same origin.” (CCC 1934). The equality of men and women “rests essentially on their dignity, as persons and the rights that flow from it” (1935). Unfortunately, while we were “created for freedom,” we also bear “the wound of original sin, which constantly draws man towards evil.” (Centesimus annus, 25). Read More

The Constantin Scholars Program at UD welcomes and supports Texas students who will be the first in their families to complete a Bachelor’s Degree. Read More

The University of Dallas recently announced a partnership with Cristo Rey Network, a national network of Catholic college-preparatory high schools, to expand access to college for their graduates, 95% of whom will be the first in their families to attend college. Read more 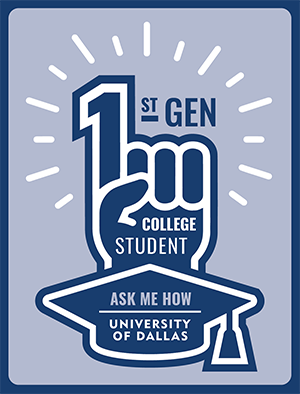 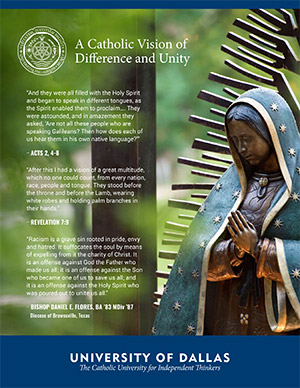