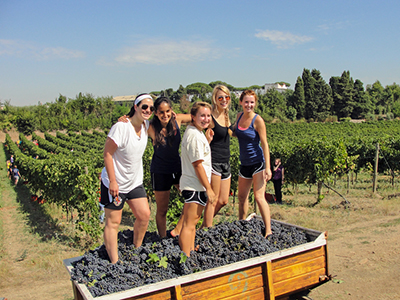 After retiring from his career as a computer programmer with IBM, Charles Uhl came to work in UD’s IT Department. He was a lifelong student who audited several classes while working at the university, as well as an avid armchair, National Geographic traveler who sent four of his five children to UD and to Rome. All of his children had inherited his love of travel, manifested during their childhoods through road trips since the size of their family precluded journeys to farther places. For the alumni children — Kathy (Milligan), BA ’91, Gary, BA ’96, Regina, BA ’00, and Christine, BA ’02 — this love was deepened and enriched by their Rome semesters, as it is for all UD undergraduates who go to Rome.

Rome is not, however, always attainable for all students. When their father passed away, the Uhl children (including Thomas, who did not attend UD), along with their mother, Nancy, set up a scholarship fund in his name to enable more students to be able to afford Rome each semester. The scholarship awards up to $5,000 per semester, divided among five to 10 students. As of Sept. 1, 2017, this scholarship is endowed and is now known officially as the Charles T. Uhl Memorial Scholarship Endowment Fund. It is open to contributions from anybody who would like to help ensure that all students who want to go to Rome are financially able to do so.

Because space on the Eugene Constantin Campus in Rome can also be a limiting factor in determining who gets to go to Rome and who does not, the Uhl and Milligan families also encourage contributions to the Rome Expansion Campaign.

For UD undergraduates, Rome is a dream and a legend realized, a transformational experience that shapes their studies and their lives; to help perpetuate it, give now to the Charles T. Uhl Memorial Scholarship Endowment Fund and/or to Rome Expansion.

In the photo: Students crush grapes for UD's Due Santi Rosso wine in the vineyard on the Eugene Constantin Campus just outside of Rome.