‘Where Has the Time Gone?’ 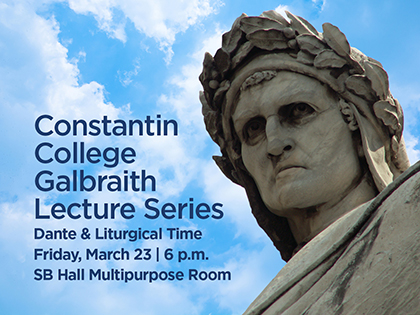 As we age, most of us ask ourselves, where has the time gone? Borrowing text from UD’s Core curriculum, this spring semester’s Galbraith Lecture will explore the difference between our own perception of time, and how the philosopher-poet Dante Alighieri viewed mankind’s immortal clock, steeped in Scripture and in life.

The university community will gather on Friday, March 23, starting at 6 p.m. in the SB Hall Multipurpose Room, to hear the renowned scholar Anthony Esolen, Ph.D., teaching fellow, writer in residence and professor of English Renaissance at Thomas More College of Liberal Arts. Esolen, who is lauded in academic circles for his new translation of Dante’s Divine Comedy, will deliver his lecture, titled “Dante and Liturgical Time.”

“Dante Alighieri is arguably the greatest poet who ever lived,” said Esolen in 2013, lecturing on Catholic Courses. “It’s not easy to say what the Divine Comedy is about because, in fact, it is about everything of the meaning of human life.”

In his translation, Esolen writes: “In general, Dante’s view of time is not ours: Time is not an amoral fourth dimension in a four-dimensional space-time continuum. It is the moving image of eternity.”

“All times are impregnated with God’s being and his eternal purposes,” he continued. “To know the time is to know one’s relation to the creator of time, and thus to see the end, or purpose, of time as present in the here and now.”

Esolen will use Dante’s masterpiece to explore time beyond simply the hours of our days by analyzing the years of a man’s life to observe the entire history of mankind from the fall of Christ to the Second Coming.

With special thanks to the family of Alex T. Galbraith, this lecture is part of the Constantin College Galbraith Lecture Series, which each year brings to campus speakers of academic and professional distinction whose expertise complements the central texts and themes of UD’s Core curriculum.

When it came time for Ana Henriquez, BA '20 and Class of 2020 valedictorian, to pick a college, she knew she wanted a small, Catholic, liberal arts university that offered both biology and Latin. That sounds like UD in a nutshell, and she thought so too. In the spring of her senior year of high school at The Atonement Academy in San Antonio, as she approached UD's campus for her last visit, she knew she would spend the next four years there and shouted to her mom, "Look, that's my tower! That's my home!"

Given his strong UD legacy, Bill Bennett, BS '20, was practically destined to attend the University of Dallas. Stories about UD's Rome Program and rugby were essential aspects of Bennett's childhood given that both of his parents, as well as many extended relatives, are UD alumni. But while UD was in his blood, he ultimately chose UD because he wanted both a liberal arts education and a degree in physics, and he knew UD was the best place to combine the two.

It is not uncommon for the University of Dallas (UD) and the University of Texas at Dallas (UTD) to get confused, and Adella Klinte, BA '20, was unfortunately subject to that confusion. When she applied to UD, Klinte thought she was applying to UTD. Crazy though it may seem, Klinte thinks it was God's plan all along.