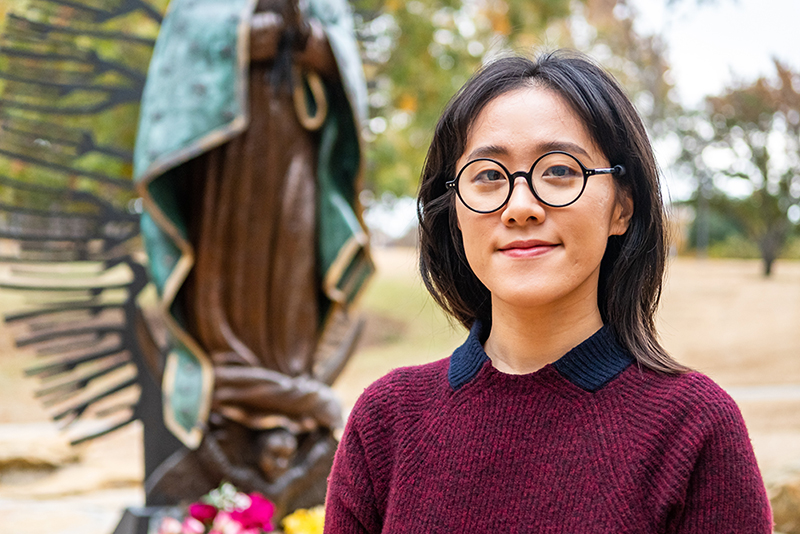 After finishing her first year of law school in Beijing, Vicky Sun, BA ’20, traveled to Washington, D.C., where she studied the American Constitution for one summer at Georgetown Law School. She was intrigued by the fundamental nature of politics, and when she expressed her desire to further her studies, one of her professors recommended she consider UD.

“I belong to the Church, and I’m a daughter of God.”

“That’s when I learned for the first time about The Federalist Papers, philosophy and Aristotle,” she said of her time at Georgetown Law. With an enlightened perspective of discovery, Sun began asking herself, What makes good politics? “I wanted to know, what is the political philosophy behind a regime and political force?”

Taking the advice of her professor, Sun’s quest for knowledge soon transformed into a higher calling: a pursuit of “truth and happiness,” and a liberal education at the University of Dallas.

“I’m very passionate about doing the right thing,” she said. And in reading the Great Books as an undergraduate at UD, Sun began to learn about charity, friendship and love. “I became someone I never thought I could become,” she said.

Now in her senior year, Sun remains best friends with her freshman roommate, Madeleine Nerio, BA ’20, and credits her education with giving her the vision to see “evil and good in our daily life.” One of her fondest memories is of her sophomore semester in Rome and baptism in St. Peter’s Basilica.

As entering freshmen, neither Nerio nor Sun had been to Dallas before; it was Nerio’s first time to travel outside San Antonio away from family. “Thanks to my UD education, I learned to love people for the way they are,” said Sun, recalling the typical roommate quarrels the two encountered. “We both came from different traditions and have different memories,” she added.

At their end-of-semester talent show during their Rome semester, Sun “started to learn about the notion of friendship, and the notion of love, even though we all have so many differences from one another.” She realized she “loved every human being in the room — I had a community and friendship. I believe friendship and community are the first steps in learning how to pursue happiness after you understand the principles of right and wrong.”

“Our transformation is a result of our shared education,” said Sun.

“We are all created by God, and his grace is delivered to every living person as long as we realize this and choose the voice of God,” she added. “We all need guidance. We are all vulnerable. We all need help … God calls us to live a righteous life.”

Sun has also decided that six credits of theology are not sufficient and hopes to further her studies with a master’s in theology; she is especially grateful for the advice and support of two UD professors, Assistant Professor of Politics Gladden Pappin, Ph.D., and Chair of UD’s Politics Department Richard Dougherty, Ph.D.

Whenever faced with self-doubt or requiring patience, Sun reminds herself: “I belong to the Church, and I’m a daughter of God.” Her pursuit of happiness is fundamentally urgent. “That’s why I came to study at UD,” she said. “No one told me you can pursue happiness.”

“Human values are not about the principles of right and wrong. It’s about our reality compared to the truth — and the truth is God."

She recalled a few standout moments that have guided her to this one, such as her senior course on religion and modernity during which she learned how biblical translations have altered throughout history based on understandings of human values in society. “That’s when I realized, I have to go back to spiritual necessity,” said Sun. “I want people to see the spirituality of our life … and to listen to the moral teachings of the church.”

Over the past 60 years, she explained, “[t]he interpretation of the constitutional clauses has transformed … and that’s a result of the first philosophical understanding of values in our society.” She continued, “I realize the political structure and the principles — the real ties in politics — cannot be solved by laws, which means ... I should go back to the fundamental understanding of human values.”

“Human values are not about the principles of right and wrong,” added Sun. “It’s about our reality compared to the truth — and the truth is God … My vocation in the end is about evangelization.”

“My priority is the study of human values, which is universally fundamental to human nature in our religious belief,” she concluded. “Human nature is limited and sinful but also beautiful.”