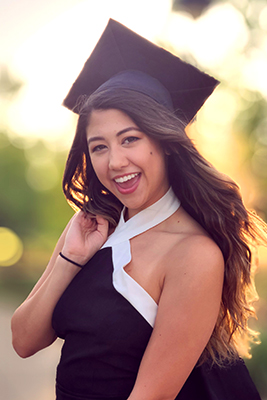 This is the sixth in a series of eight stories that will be published to highlight the achievements of some of our seniors in the Class of 2020.

It is not uncommon for the University of Dallas (UD) and the University of Texas at Dallas (UTD) to get confused, and Adella Klinte, BA ’20, was unfortunately subject to that confusion. When she applied to UD, Klinte thought she was applying to UTD.

Crazy though it may seem, Klinte thinks it was God’s plan all along. Within a week of setting foot on campus for the first time, she saw that there was something very special about it. Klinte was especially impressed by the people, and she has remained grateful for those people, who are now her friends, throughout her four years.

Although she found much unexpected goodness at UD, she also found some unexpected difficulties, especially in the Core Curriculum. Klinte says her high school experience did not prepare her for the Core, and it was especially hard knowing nothing about it when she started. At first she struggled, but after she learned to take advantage of office hours, the writing lab and tutoring, she began to hit her stride.

“The Core shaped my way of thinking, so I am extremely grateful for it, but it was challenging at the beginning,” she said.

“I couldn’t imagine any other major besides business,” she said.

Klinte loves everything about UD’s business program, but what she finds most incredible are the professors. As Klinte maneuvered her way from the world of science to business, she took advantage of the small student-to-faculty ratio, seeking help from her professors, and they never failed her.

“Every professor truly helped as much as they could,” she said. “I never would have been able to get that in a state school.”

From these interactions, Klinte was able to develop a good relationship with her professors, which has helped her beyond her classes.

“Adella was always a high-energy student and her positivity was infectious,” said Professor of Management J. Lee Whittington, Ph.D. “She had a strong work ethic. She was able to maintain her commitment to the courses while working multiple part-time jobs, along with significant internships.”

While Klinte was delving into the world of business, she made sure to take advantage of the UD community. Klinte says she went to TGIT almost every week, got her feet wet with intramural sports, and helped plan an open-mic night for Charity Week. This open-mic night became the pinnacle of the UD community to Klinte and one of her favorite memories at UD. It was on this night that Klinte realized, “Wow, everyone is family here.”

This family and her education have helped Klinte grow in almost every single way.

“The person I am today is so different in comparison to who I was when I was 18,” she said. “I grew in every aspect: my education, work ethic, relationships, and most importantly, my religion.”

Looking back at UD, Klinte sees many good memories, but there is one bad thing that really sticks out: COVID-19. While she was enjoying all her “lasts” at UD in one of her favorite semesters yet, Klinte says she feels somewhat robbed by COVID-19. At the same time, however, Klinte realizes that “life happens, and you can either grow from it or let it hinder you.”

And grow from it she will: Klinte plans on furthering her education for one more year. She is currently pursuing a Master of Science in cybersecurity through one of UD’s 4+1 programs.

Through the ups and downs, predicted and unpredicted, Klinte concludes, “While my journey here was random and unexpected, I am so grateful to become an alumna of UD.”