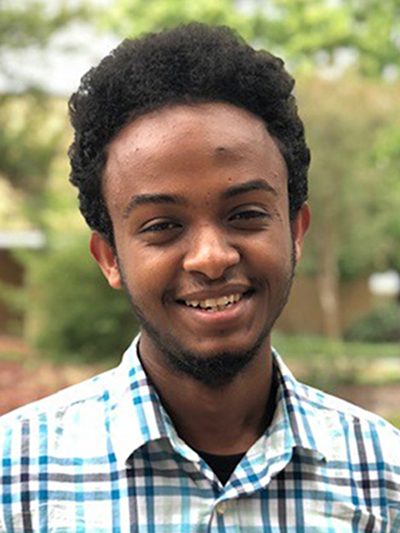 Notable UD Memories/Achievements: Playing Soccer for UD; Being on the Computer Programming Team; Being Secretary and Vice President of the Student Association for Computing Machinery (ACM) Chapter at UD; Summer 2018 Internship at Google

Future Plans: Working as a Software Engineer with Google

This is the fourth in a series of eight stories that will be published to highlight the achievements of some of our seniors in the Class of 2020.

For many people, traveling over 8,000 miles to school might be too far, but not for Yeabkal Wubshit, BS ’20. Hailing from Addis Ababa, Ethiopia, Wubshit came to UD at the recommendation of a friend who was a current student at the university. The first time he set foot in the United States was when he arrived in Irving for UD’s freshman orientation.

Although he is ultimately happy with his decision, Wubshit did not always find life at UD easy. The famous Core Curriculum was especially difficult.

“Having to do extensive reading in English, which is not my first language, was overwhelming, especially in the first semester,” he said.

One of Wubshit’s favorite professors, Associate Professor of Computer Science Robert Hochberg, Ph.D., with whom Wubshit has had 10 classes, noticed Wubshit’s initial difficulty at UD. However, he also noticed Wubshit’s tenacity in overcoming it.

“From the time he began at UD, he was putting in many extra hours, complementing his classroom learning with independent learning and interesting projects,” said Hochberg.

Despite the initial challenges, Wubshit quickly overcame the obstacles and fully immersed himself in UD: He joined the soccer team and the computer programming team, and was secretary and vice president of the student Association for Computing Machinery (ACM) chapter at UD. To top it off, Wubshit worked 20 hours per week in the campus cafeteria in addition to being a computer science tutor. As busy as he was, Wubshit dedicated much of his time to his major.

Although he had previously planned on becoming an architect, Wubshit chose to take a few classes in computer science at UD and soon became fascinated by the different and efficient ways in which computer programming allowed him to solve problems. Wubshit felt that, although UD is not as big of a school as others and thus doesn’t have as many elective opportunities, UD’s computer science program enriches its students with a strong core.

Moreover, Wubshit sees that UD didn’t only help him build a strong foundation in computer science; it allowed students to “freely explore their personal, academic and career interests through computing.” Given UD’s small class sizes, Wubshit had the freedom to explore computer programming in the ways that most intrigued him, while still under the instruction of his professors.

His ability to overcome obstacles and his desire to learn make Wubshit the kind of student that professors pray they have.

“For hard work, tenacity, talent and a desire to learn, you can not find a better student of computer science than Yeabkal Wubshit,” said Hochberg, who knows Wubshit better than any other professor at UD.

Wubshit is grateful for the support he received in his academics, as well as in his personal and spiritual life.

“UD was a great journey that significantly and positively shaped my personal, spiritual and academic character,” he said. “I have been highly challenged in a highly supportive community to become a better person.”

Perhaps now more than ever, Wubshit is grateful for the things UD has given him. Learning to adapt and make accommodations during the COVID-19 pandemic has reminded Wubshit of an important lesson “to appreciate and not take for granted everything life has to offer.”

The community that surrounded Wubshit at UD helped him to feel at home while still 8,000 miles from his native country and to develop into the person he wanted to become, while also receiving an education. Taking these skills with him, Wubshit is planning to move to California to turn his past internship as a software engineer for Google into a full-time job after graduation.

As Wubshit transitions into the working world full time, he keeps his favorite Bible verse ever at the forefront of his mind: "I will exalt you, my God the King; I will praise your name for ever and ever." Psalm 145:1