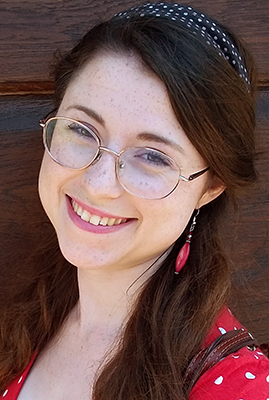 Notable UD Memories/Achievements: Snow in Rome; Realizing the Value of Education in UD's Curriculum; Researching with Professors, including in Dr. Cody's Molecular Microbiology Lab; Receiving the Goldwater Scholarship; Representing Her Class as Valedictorian

Future Plans: Pursuing Doctorate in Cell and Molecular Biology at the University of Texas Southwestern

This is the last in a series of eight stories published to highlight the achievements of some of our seniors in the Class of 2020.

When it came time for Ana Henriquez, BA ’20 and Class of 2020 valedictorian, to pick a college, she knew she wanted a small, Catholic, liberal arts university that offered both biology and Latin. That sounds like UD in a nutshell, and she thought so too. In the spring of her senior year of high school at The Atonement Academy in San Antonio, as she approached UD’s campus for her last visit, she knew she would spend the next four years there and shouted to her mom, “Look, that’s my tower! That’s my home!” And indeed just a few months later, she was on UD’s campus for the O’Hara Chemical Sciences Institute before starting the regular semester.

When she started at UD, she jumped in with two feet, getting involved in a variety of different organizations immediately. Henriquez fully embraced the opportunity at UD to research with professors, beginning with research in Associate Professor and Chair of Biology William Cody’s Molecular Microbiology Lab; she has kept this up every year she has been at UD. She has also done research in a variety of other off-campus labs and is currently the president of the American Society for Microbiology at UD.

Not just any student works in Cody’s lab starting as a freshman, but Henriquez impressed Cody from day one.

According to Cody, Henriquez was an excited and independent learner and a mentor for all her peers, but perhaps more importantly, she has “a warm and endearing personality that commands any room she enters.”

The experience Henriquez gained from these opportunities, paired with her own intellectual prowess and assistance from her professors, led to her being awarded the prestigious Goldwater Scholarship in 2019, which helped fund her pursuit of research. Henriquez was one of under 500 students (5,000 were nominated) to receive the award in 2019, and one of three UD Goldwater recipients in the past two years.

Not only did Henriquez learn and research the facts of her field and the content of her classes during her time at UD, UD has also given her something much more valuable.

“UD has taught me how to defend the pursuit of knowledge as a good end in and of itself,” she said. “This provides meaning to my work and fortifies my love of scientific research and education.”

Although this lesson may not be particularly impressive on paper, Henriquez sees the value as going far beyond paper. This realization of where the value of education lies is exemplified in one of her favorite memories of UD. She recalls being in Rome when it snowed for the first time in many years, and instead of sitting in philosophy class as they normally would have, her professor said, “This is your philosophy for today. Go and explore the beauty and the truth in the world.”

Henriquez’s love of learning has led her to pursue further higher education; in the fall of 2020, she will be attending the University of Texas Southwestern in pursuit of a Ph.D. in Basic Biomedical Sciences: Cell and Molecular Biology. Upon obtaining her doctorate, Henriquez hopes to complete a post-doctoral fellowship before becoming a professor at an undergraduate institution. Henriquez is excited for the upcoming years, but due to the unique circumstances of COVID-19, she has had a chance to contemplate her past four.

COVID-19 has brought many disappointments and trials: not being able to say goodbye to many of her friends, having to take classes online, and feeling fear for those contracting the disease, including some family and friends. But these downsides do not stop her from seeing the good things in the situation, such as learning she is capable of online classes and more intentional time spent with friends. Additionally, she looks back with gratitude for all of those who serve UD, often unnoticed, namely the UD Police Department and Facilities and custodial workers.

Ultimately, while COVID-19 has made the future uncertain, Henriquez refuses to give up hope.

“Whatever the next few months bring for me as a graduate student, I trust that whatever happens will be according to God's will, an acknowledgement that both prepares me for the roller coaster of graduate school and strengthens my faith and hope in an omniscient, almighty and all-loving Creator,” she said.