Church of the Incarnation

Church of the Incarnation

Looking for adoration over the summer? Here are some options!

The Summer Liturgical Schedule began on Monday, May 9, 2022. Please CLICK HERE for Mass and         confession times.

The University of Dallas is in its 65th academic year. Since opening its doors in September 1956 with 96 students, the University has grown to over 3,000 students at the undergraduate and graduate levels. The original chapel, named in honor of St. Thomas Aquinas, was located on the west side of campus and was used for daily Mass and private prayer until the opening of the Chapel of the Incarnation on March 24, 1985.

On August 15, 2001 the Diocese of Dallas changed the status of Chapel of the Incarnation to the Church of the Incarnation. This title indicates and emphasizes the church's special status as a faith community that is centered not in a geographical setting, but rather on a university campus. The church has as its primary responsibility to serve the spiritual needs of the students, faculty, staff, and alumni of the university and welcomes others to participate in worship here.

As a Catholic faith community, it stands in a position of openness and hospitality to all who desire to worship here.

In 2014, the American Institute of Architects Dallas Chapter awarded the Church of the Incarnation the 2014 AIA Dallas Twenty-Five Year Award.  This award, the highest award bestowed by AIA Dallas, is given annually to an enduring post-war architectural work that is at least 25 years old.

On Thursday, January 31, 2019, the Diocese of Dallas published on this website -  cathdal.org/response - a list of clergy credibly accused of sexual abuse of a minor in the diocese dating back to 1950.
Situations involving abuse of minors must be reported to the Texas Department of Family and Protective Services at 1-800-252-5400 or txabuseho tline.org  In emergency, call 911. 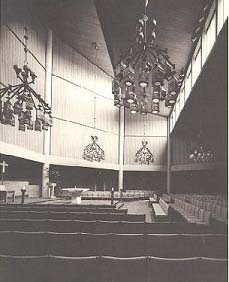