The Jeanne Clery Disclosure of Campus Security Policy and Campus Crime Statistics Act (20 USC § 1092(f)) is the landmark federal law, originally known as the Campus Security Act, that requires colleges and universities across the United States to disclose information about crime on and around their campuses.

Because the law is tied to participation in federal student financial aid programs it applies to most institutions of higher education both public and private. It is enforced by the U.S. Department of Education.

The "Clery Act" is named in memory of 19 year old Lehigh University freshman Jeanne Ann Clery who was raped and murdered while asleep in her residence hall room on April 5, 1986.

To the maximum extent possible, the University of Dallas is dedicated to providing a safe and secure environment. This report is required by federal law and contains crime statistics for the school.

Three years’ worth of statistics are included in this report for certain types of crimes that were reported to have occurred on campus, in or on off-campus buildings or property owned or controlled by the school and on public property within or immediately adjacent to the campus. Preparing the Annual Disclosure of Crime Statistics

Reports of criminal activity given to University of Dallas Police, Student Affairs and reports of crimes made to local law enforcement agencies are collected and included in the Annual Security Report as required by the Clery Act. This report is available online at https://udallas.edu/offices/police. You may also request a paper copy from the University of Dallas Police Department.

Pursuant to 20 United States Code section 1092(f), the "Jeanne Clery Disclosure of Campus Security Policy and Campus Crime Statistics Act," and the Code of Federal Regulations (CFR) requires that each institution of higher education in the United States which participates in federal student aid programs must produce and distribute an annual report containing crime statistics and statements of security policy. Failure to provide required information or the inclusion of inaccurate information may result in significant fines

The following definitions are given in the final regulations on the Violence Against Women Act, drafted by the Department of Education and published in Vol. 79, No. 202 of the Federal Register on October 20, 2014.

Arson - Any willful or malicious burning or attempt to burn, with or without intent to defraud, a dwelling house, public building, motor vehicle or aircraft, personal property of another, etc.

Aggravated Assault - An unlawful attack by one person upon another for the purpose of inflicting severe or aggravated bodily injury. This type of assault usually is accompanied by the use of a weapon or by means likely to produce death or great bodily harm. (It is not necessary that injury result from an aggravated assault when a gun, knife, or other weapon is used which could and probably would result in serious personal injury if the crime were successfully completed.)

Criminal Homicide - Manslaughter by Negligence - The killing of another person through gross negligence.

Criminal Homicide - Murder and Nonnegligent Manslaughter - The willful (nonnegligent) killing of one human being by another.

Dating Violence - Violence committed by a person who is or has been in a social relationship of a romantic or intimate nature with the victim.

(ii) For the purpose of this definition –

(A) Dating violence includes, but is not limited to, sexual or physical abuse or the threat of such abuse.

(B) Dating violence does not include acts covered under the definition of domestic violence.

(i) A felony or misdemeanor crime of violence committed –

(A) By a current or former spouse or intimate partner of the victim;

(B) By a person with whom the victim shares a child in common;

(C) By a person who is cohabitating with, or has cohabitated with, the victim as a spouse or intimate partner;

(D) By a person similarly situated to a spouse of the victim under the domestic or family violence laws of the jurisdiction in which the crime of violence occurred, or

(E) By any other person against an adult or youth victim who is protected from that person’s acts under the domestic or family violence laws of the jurisdiction in which the crime of violence occurred.

Drug Abuse Violations - The violation of laws prohibiting the production, distribution, and/or use of certain controlled substances and the equipment or devices utilized in their preparation and/or use. The unlawful cultivation, manufacture, distribution, sale, purchase, use, possession, transportation, or importation of any controlled drug or narcotic substance. Arrests for violations of State and local laws, specifically those relating to the unlawful possession, sale, use, growing, manufacturing, and making of narcotic drugs.

Fondling– The touching of the private body parts of another person for the purpose of sexual gratification, without the consent of the victim, including instances where the victim is incapable of giving consent because of his/her age or because of his/her temporary or permanent mental incapacity.

Hate Crime – A crime reported to local police agencies or to a campus security authority that manifests evidence that the victim was intentionally selected because of the perpetrator’s bias against the victim. For the purposes of this section, the categories of bias include the victim’s actual or perceived race, religion, gender, gender identity, sexual orientation, ethnicity, national origin, and disability.

Incest - Sexual intercourse between persons who are related to each other within the degrees wherein marriage is prohibited by law.

Intimidation - To unlawfully place another person in reasonable fear of bodily harm through the use of threatening words and/or other conduct, but without displaying a weapon or subjecting the victim to actual physical attack.

Liquor Law Violations - The violation of State or local laws or ordinances prohibiting the manufacture, sale, purchase, transporting, possession, or use of alcoholic beverages, not including driving under the influence and drunkenness.

Motor Vehicle Theft - The theft or attempted theft of a motor vehicle. (Classify as motor vehicle theft all cases where automobiles are taken by persons not having lawful access even though the vehicles are later abandoned – including joyriding.)

Rape - The penetration, no matter how slight, of the vagina or anus with any body part or object, or oral penetration by a sex organ of another person, without the consent of the victim.

Robbery - The taking or attempting to take anything of value from the care, custody, or control of a person or persons by force or threat of force or violence and/or by putting the victim in fear.

Sex Offenses - Any sexual act directed against another person, without the consent of the victim, including instances where the victim is incapable of giving consent.

Sexual Assault - An offense that meets the definition of rape, fondling, incest, or statutory rape as used in the FBI’s Uniform Crime Reporting program and included in Appendix A [of the regulations].

Simple Assault – An unlawful physical attack by one person upon another where neither the offender displays a weapon, nor the victim suffers obvious severe or aggravated bodily injury involving apparent broken bones, loss of teeth, possible internal injury, severe laceration, or loss of consciousness.

(A) Fear for the person’s safety or the safety of others; or

(ii) For the purpose of this definition –

(A) Course of conduct means two or more acts, including, but not limited to, acts in which the stalker directly, indirectly, or through third parties, by any action, method, device, or means follows, monitors, observes, surveils, threatens, or communicates to or about a person, or interferes with a person’s property.

(C)  Substantial emotional distress means significant mental suffering or anguish that may, but does not necessarily, require medical or other professional treatment or counseling.

Statutory Rape - Sexual intercourse with a person who is under the statutory age of consent.

University of Dallas Clery Geography - Campus Security Authorities are obligated to report Clery Act qualifying crimes that are reported to them which occurred on Clery reportable locations.

Public Property –"public property" is defined by the Clery Act regulations as all public property including thoroughfares, streets, sidewalks, and parking facilities that is within the campus, or immediately adjacent to and accessible from the campus. Include the sidewalk across the street from your campus, but do not include public property beyond the sidewalk. 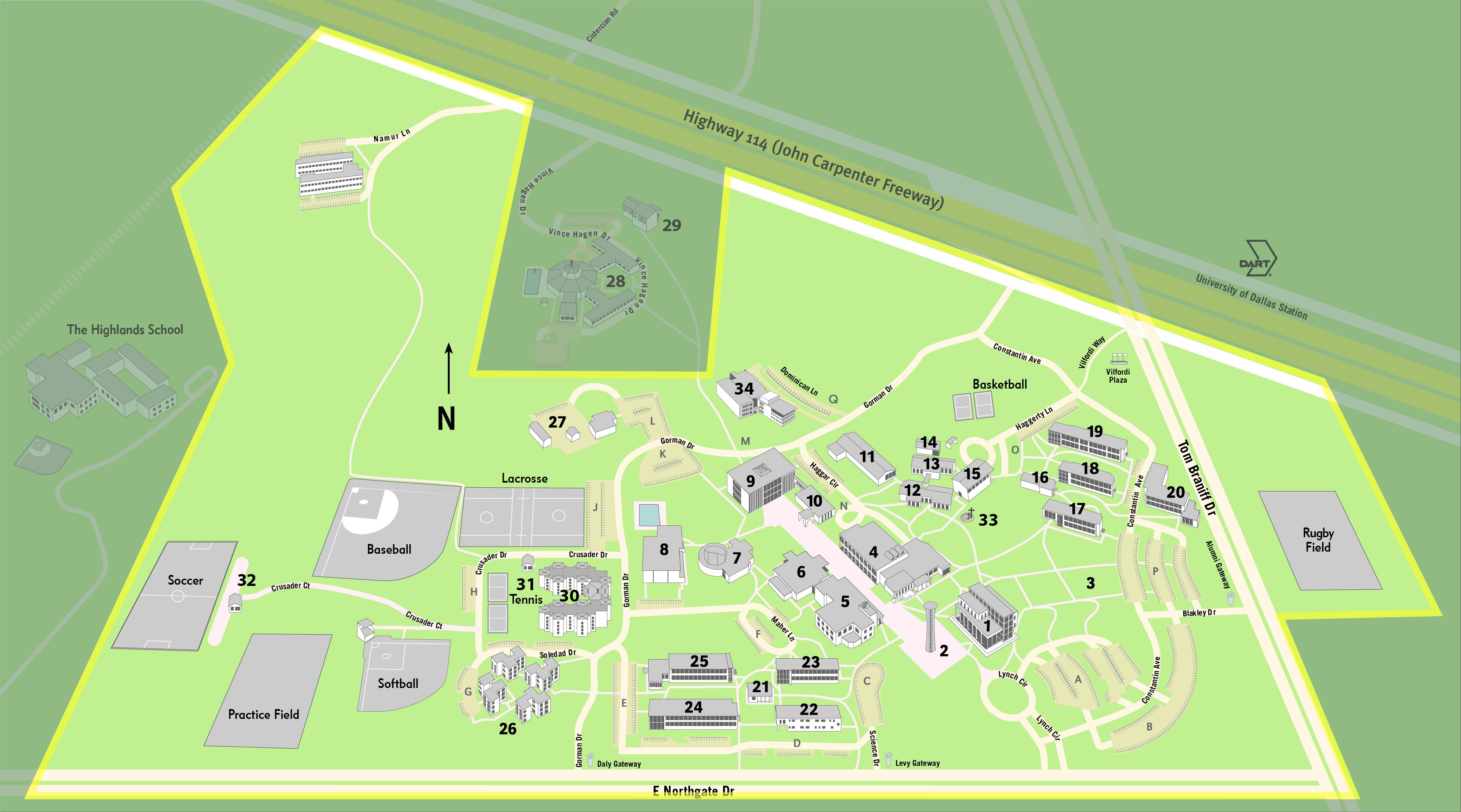 Clery Reportable Trips -Pursuant to the Clery Act, The University of Dallas is required to disclose on an annual basis certain reported crime statistics that occur during University sponsored / arranged domestic and international student trips.