What should you do during an earthquake?

DROP - DROP down to the floor.

COVER - Take COVER under a sturdy piece of furniture. If that is not possible, seek cover against an interior wall and protect your head and neck with your arms. Avoid danger spots near windows, hanging objects, mirrors, or tall furniture.

HOLD - If you take cover under a sturdy piece of furniture, HOLD on to it and be prepared to move with it. HOLD the position until the ground stops shaking and it is safe to move.

Tips to Protect Yourself During an Earthquake 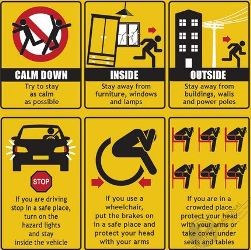