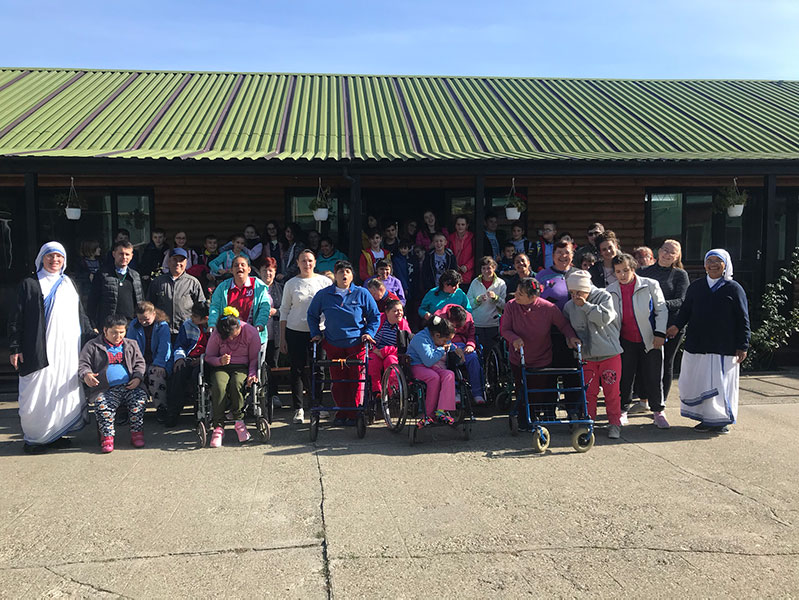 The story of my fall break (2019) mission trip to Romania is worth telling, both for what my friends and I managed to do for others, and for the unexpected impact this experience had on me. In all honesty, neither the usefulness of the trip nor any expectation of deepening my faith were on my radar as I signed up to go, last minute. But since I was wrong on both accounts in the end, it may be worth documenting my experience as an encouragement and lesson to others.

Our mission trip began when we stepped off the plane in Bacau — one of Romania’s biggest cities — into the smallest airport the four of us had ever been in. The air was bitter, and the wind surfaced goosebumps on our arms. A man introducing himself as “Jerry” met us as we left the airport, and he was carrying a sign that simply said, “Mother Teresa.” Jerry was a neighborhood friend of the Missionaries of Charity and much more. As he drove us to our destination along ugly roads lined with construction sites, Jerry became our guide and tutor. He gave us a clear picture of the challenges of our temporary home. He spoke of his factory job as a young man and the democratic revolution that ended repressive communism and opened up free speech 30 years ago. He explained that the women whom we were now coming to serve were children when communism fell, abandoned at the time because of their disabilities. As we drove down the streets listening to Jerry speak and watching out the car window, I could not help but wonder why Romanians were not clever enough to hide the desolation of their ugly roads by rebuilding them. Before long, though, it occurred to me that you cannot hide the scars of a bitter past with a mere coat of fresh paint.

Upon arrival, the convent’s Mother Superior led us to our living quarters. The halls were dark and silent, and everyone in the house was asleep. The room assigned to us had a table with chairs, four cots, and a dorm-style bathroom. She suggested meeting her fellow sisters for Mass the next morning in their private chapel. On the table lay a teapot for warming up water, fresh tomatoes, a loaf of bread, and spreadable cheese. We were exhausted from the previous week’s activities in Rome, including midterms, papers, and all-nighters. At last our “exciting” fall break had begun, not in a bar or on an all-night train ride but in the silence, darkness and absolute simplicity of this convent. 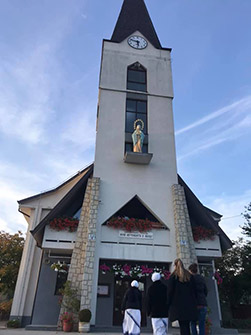 The next morning, like every morning afterward, we rose before dawn for Mass or Adoration depending on the day, and then split into different working groups. My friend Dalayna and I were assigned to the section of women with severe mental and physical handicaps. On that first day, we walked into a tiny living room and were led into the shared bedroom of the women. All were either undressed or in the process and sitting in their wheelchairs waiting to be bathed, dressed and cared for. Many did not speak, but often would only moan or mumble or yell. One of the women was usually more cheerful, smiling and laughing at us as we combed her hair. Another screamed when we approached her, and yet another often fell asleep as I fed her. Later in the morning we sang to them, sat with them, held their hands, and fixed their hair. Many were just happy to have us smile even if we could not communicate in the same language. Others remained lost in their own worlds and never acknowledged our presence.

On occasion we were permitted to take some of the more mobile women on walks. A favorite memory of ours was the day when we celebrated the birthday of two resident women. The nurses and sisters ran around gathering the girls together while we cut the cakes into tiny slivers. Older women poured juice into the outstretched cups of younger women and girls, and many residents even danced with us. It was the most joyful moment we ever had at the convent.

As time passed with the sisters and residents, I realized that this way of life led to unrelenting grace and reward. Every day the sisters taught us about service and love of neighbor. I was taught that humanity deserves to be seen in all forms regardless of capacity, age, language or culture. All of humanity desires and needs love to function even if that means braiding someone’s hair day after day or smiling at someone who cannot speak, walk or control bodily functions.

On the last day before our departure, I went in search of a very special woman under my care named Maria. Because Maria had Down syndrome but was not severely disabled, she had become a kind of an extra helper within our section. At times she could make everyone laugh and play, while at others she could be even a bit naughty. For instance, she only let one specific nurse do her hair until my very last day at the convent, when at last — and knowingly — she let me take over. Her laugh was infectious, even at inappropriate times, such as when she teasingly laughed at me as she tried to teach me how to dance and make necklaces. Whatever the circumstance, Maria’s laugh was infectious. As I sat there with her on that last day, one of the sisters turned to me and asked: “Belynn, what religion are you? I see you praying, but I wasn’t sure who you were praying to.” This question has haunted me since we left Romania.

Why? My idea of faith up until this experience was as a post-evangelical believer, or what I like to call a theological homeless person. Even though I had been searching for answers on matters of the faith since I was 16 years old, I had only found them so far in education and its promise of understanding a higher good. Then came this mission trip and the sister’s timely question. “I’m a Christian,” I said to her with a smile, an answer she accepted happily. The sister did not try to convert me or inquire whether I was Catholic. Rather she, her fellow sisters, Jerry and Romania helped me see something universal about God’s love and faithfulness and what it truly means to love thy neighbor. Unlike a fresh coat of paint on a country stained by tragedy, God’s faithfulness restores.

Rome Chaplain Monsignor Thomas Fucinaro deserves high praise for making this and other mission opportunities available to UD Rome students. I, for one, am better for having followed his call, even if it was last minute. 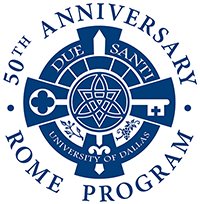