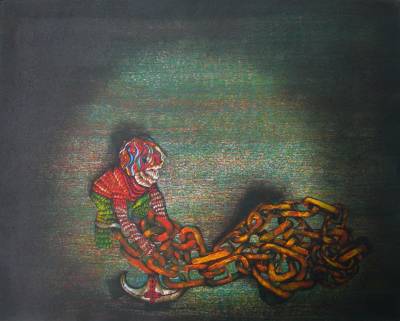 A Mexican artist currently residing in Houston Texas. Humberto was born in Tamaulipas, Mexico and in the mid 1980's with his two parents, he immigrated to the United States of America. Mission, Texas became home to Humberto Saenz where he learned English as a second language and went on to graduate from Mission High. Humberto Saenz went on to study Studio Arts at Baylor University in Waco, Texas. In 2006, he received a Master of Art in Art from the University of Dallas in Irving, Texas. Humberto finished his studies in 2008 at the University of Dallas by receiving a Master of Fine Arts with a concentration in Printmaking. Currently, Humberto Saenz serves as an Adjunct Instructor of Art at Lone Star Community College and Houston Community College. He currently teaches art appreciation, drawing, and printmaking. He has recently been interviewed by Think MTV, the Houston Chronicle, and The Dallas Morning News. Humberto Saenz also exhibits his artwork throughout the United States and abroad in solo, juried, and invitational exhibitions.