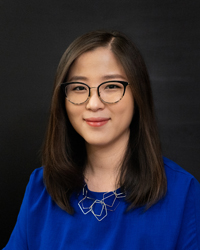 Mihee Nahm’s work was influenced by living as an expatriate in America for over a decade which pushed her to explore themes of memory, sense of place, and nostalgia. In her current body of work titled Soaked, she creates oil and acrylic paintings capturing a sense of poignancy found in nature that evokes bittersweet feelings of melancholy and the fleeting passage of time. Her emotive, lifelike renderings conjure the scent of rain, the feeling of changing weather, and the moods that they bring.

Mihee Nahm received her MFA from the University of Texas at Austin in 2012 and completed a BFA from the Art Academy of Cincinnati in 2008. She has attended residencies at the Vermont Studio Center, Kimmel Harding Nelson Center, and Brush Creek Foundation. Her work has been shown in solo and group exhibitions nationally.

I create paintings and drawings to capture the poignant landscape I encounter on my daily commute and walk: puddles, fallen leaves, clumps of cut grass, a defunct well, rain traces recorded on sand, and nightscape. My work begins with constant observation. Subtle changes in the time of the day, the weather, and the mood I am in alter the characteristics of the things observed. The surrounding environment mirrors my state of mind.

Previously, I worked on still life paintings of sentimental objects from my past. These objects were set up in the studio where windows were blocked off to maintain consistent lighting. I spent countless hours looking at the objects and painted from observation. Two years ago, my sudden move back to Texas uprooted me once again from my home country of South Korea. The leafy, earthy Texas landscape creates a nostalgia within me similar to that which I once felt from the objects of my past. I began photographing and painting to hold onto these fleeting images in the same way that I once wanted to hold on to the past through still life. The degree of mimesis varies from painting to painting. The numerous images collected daily are categorized and archived to later be composited and manipulated. These source images are then painted using oil and acrylic. The form is slowly built up through layered shapes until edges appear to define the form.

Since last year, I have been working with images of rainy days and twilight skies. The dampness and smell of rain in the air remind me of playing in the mud during my childhood during monsoon seasons. I seek to elicit visceral reactions from the viewer through my paintings as if they too are walking in the rain. A sense of poignancy felt on rainy days and when viewing night skies accentuates the feeling of melancholy. Longing for an unattainable moment in the past and the sadness of absence pervades my day to day life as an expatriate. Nature has a way of allowing me to drift into an inner space. The bittersweet feelings of melancholy and nostalgia are presented through depictions of nature in this body of work.