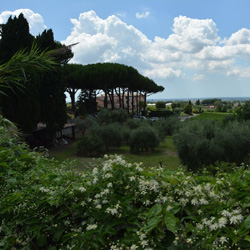 Beauty and Serenity in the Italian Countryside.

The university's 20-acre Eugene Constantin Campus rests in the beautiful foothills just off the Via Appia about one hour southeast of Rome, where ancient Rome got its start and where Romans and popes take their summer rest.

A History of the Property

The Eugene Constantin Rome Campus is located in Due Santi ("The Two Saints"), a historic district south of Rome that was named in honor of Saints Peter and Paul. Local archaeological finds from the Roman period suggest that the ancient Romans valued the area for its fresh air and its beautiful countryside. They built marvelous suburban villas here that allowed them to escape from the hustle and bustle of the ancient city. Archaeological and architectural finds on and near the UD campus itself confirm Due Santi's importance in subsequent centuries as well-from the Middle Ages right through to the Renaissance and Baroque eras.

In the early twentieth century, the site on which the University of Dallas campus now stands belonged to the Renzo Piga family who built a small farm and suburban villa enhanced by such amenities as a tennis court, a swimming pool, a vineyard and spacious gardens. In 1990, the University of Dallas purchased the property and began a campaign of building and reconstruction that added a student dormitory, dining facilities, classrooms, an outdoor theater and an athletic field. The Eugene Constantin Rome Campus was officially inaugurated in June, 1994 and received its first sophomore class in the fall of that same year.

The Rome campus is located near the cities of Marino and Frattocchie, some 22 km (13.5 miles) southeast of Rome on the Via Appia Nuova. It is 2.5 km (1.5 miles) from the small town of Castel Gandolfo and the nearby recreational area of Lake Albano (Lago di Albano).