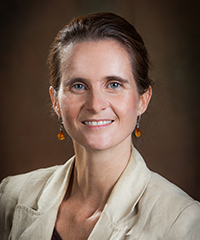 Dr. Laura Eidt has taught in the German, Spanish, Comparative Literature, and Humanities programs at the University of Dallas since 2006, and is Director of the Humanities Program and Faculty Advisor for the K-12 Classical Curriculum Team.

Laura Eidt grew up in Germany and received her B.A. in English, Spanish, and German Literatures and Linguistics from Hamburg University. After a year-long scholarship to study at the Universidad Complutense of Madrid, she decided to pursue a career in Comparative Literature at the University of Texas in Austin. She wrote her M.A. thesis entitled Poetry of German Expressionism and the Spanish Avant-garde: Re-Contextualizing García Lorca’s Poeta en Nueva York and her doctoral dissertation, Writing and Filming the Painting: Ekphrasis in Literature and Film, which was published as a book by Rodopi Editorial in 2008. Dr. Eidt is interested in the interrelations of various art forms, particularly literature, the visual arts, and film, and she loves to use a variety of media in all of her classes, from introductory language classes to advanced comparative literature classes. Having studied English, Spanish, French, Italian and Latin (in addition to her native German) at various points in her life, she is also highly interested in how languages are learned, how they are related, and in effective ways of teaching foreign languages. She has been teaching in the German, Spanish, Comparative Literature, and Humanities Programs at the University of Dallas since 2006 and regularly teaches various classes on Foreign language pedagogy, German literature, German and Spanish language classes, a class on Teaching Classical Children’s Literature, and Great Works in the Modern World.  She was a mentor at a bilingual school in Dallas for four years and now is the faculty advisor for the Classical Curriculum team, for which she is currently writing a Latin curriculum for K-3rd grade.